skip to main | skip to sidebar

Rice is central to the way of life of East and Southeast Asia. It embodies nature and culture. It strengthens human/kinship relations at the table. It is a powerful and evocative symbol of the collective self of a people.

The production initiates a collaborative performance process involving four Malaysian artists – Aida Redza, Ng Chor Guan, Sarah Ameera and Lisa Foo – working together with Mao Arata from Japan. Moved By Padi is a mixed media production that is best described as a creative act. It encompasses visuals, installations and music in an experiential site dance performance to be held at Macallum site.

Moved by Padi transplanted a paddy field into the city of Georgetown, Penang. 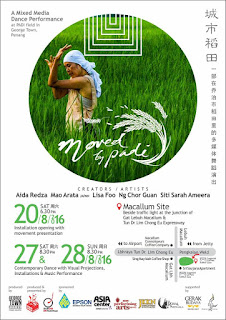 This blog was originally started with the intention to feature our 'green' initiative in creating awesome and fascinating lighting sculptures using all parts of the plastic mineral water bottles. We hope to inspire people from all walks of life to view and re-think about using plastics in a different manner instead of just treating it as waste.
Selected artists of interest will also be featured on this blog to provide a wider range of artistic ideas from different fields.

LFSS
This blog is moderated by LFSS. For further information regarding LFSS & featured artists please contact us at lfss.reuse@gmail.com